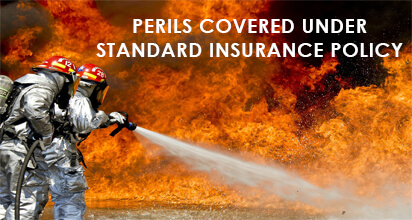 Every business has their specific set of requirements. There are a range of business products especially designed to meet the business needs across various commercial range. So it is pivotal to get adequate insurance and let’s business & individuals proactively to mitigate risks.

Fire insurance is must for all types of industries, offices, factories, households and other properties and assets. They cover the loss and damage to Industrial Tools, Plant & Machinery, Furniture, Fixtures and Fittings, Electrical Installations, Buildings etc.

E. Subsidence and Landslide including Rockslide

Loss, destruction or damage directly caused by Subsidence of part of the site on which the property stands or Land slide/Rock slide excluding:

What is not Covered ?

These additional covers are available by payment of additional premium

Fire Claims Must Satisfy These Situations?

Every Insurance Policy has their own set of terms and conditions. The above-mentioned category risk cover should be chosen accordingly. Count on the Right Policy to take final decision before purchase.